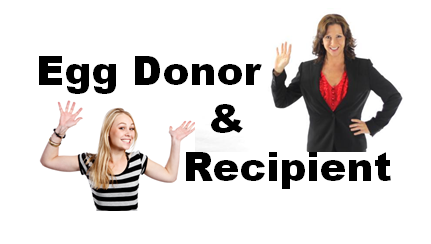 Egg donation is a process where oocytes (eggs) are retrieved from one woman, fertilized in a laboratory with chosen sperm, and then transferred into another woman’s uterus.  For a variety of patients, such as those with; premature ovarian failure, menopause, history of chemotherapy, genetic disease, multiple IVF failures, lack of a female partner and more, this process represents the best and /or only way to conceive and deliver a healthy baby.

In the vast majority of egg donation cycles, the egg donor is a young healthy volunteer who has decided to donate her eggs to another person.  Who chooses to be an egg donor?  What is their motivation?  What do they get out of it? What are the risks? These questions are common for both prospective parents who are considering using an egg donor, and for women who are thinking about becoming an egg donor themselves.

Who chooses to become an egg donor?

An egg donor can be any woman who is willing to donate her eggs to another person.  Sometimes this is a relative, friend or acquaintance of the intended parent.  Most commonly however, the egg donor is a young healthy woman who is unknown to the intended parent.  This anonymous relationship between the donor and IP affords certain psychological advantages over known donation arrangements and it represents the vast majority of egg donation cycles in the United States.

Women who are interested in donating eggs often find out about the process from friends or relatives who have been involved in egg donation (as a donor or recipient) or by advertisements in local periodicals such as college newspapers.  Donors are usually in their early to mid 20s, in overall excellent health and free of any known familial or genetic disease.  Some donors already have children and some do not, but all donors must not be currently seeking to become pregnant.

What is the motivation to be an egg donor?

In addition to the physical and emotional investment required to donate eggs, the process requires a significant time commitment from the donor.  For this reason the donor is compensated monetarily for that time, not for the eggs that they produce.  This means that if the donor goes through the entire process and does not produce many eggs or only produces poor quality eggs, her compensation is the same as a donor who makes many, top quality eggs.  Of course, when selecting a donor, every effort is taken to select a donor who will likely produce many, top quality eggs.

With this in mind, the American Society of Reproductive Medicine (ASRM) published guidelines in 2007 recommending that donor compensation should only exceed $5,000 when justified and should never exceed $10,000.

What does an egg donor get from the process?

In addition to the monetary compensation, egg donors are generally motivated by altruistic feelings.  In fact one survey of egg donors found that 88% reported that “being able to help someone” was the best part of the egg donation process.

What are the risks of egg donation?

In general, egg donation is a very safe process.  Tens of thousands of cycles are completed annually and without any complications.  With that being said, there are some specific risks that donors should be aware of.  These risks include ovarian hyperstimulation syndrome (OHSS), ovarian torsion and bruising and swelling at the injection sites.  Also, some studies have pointed towards a possible increased risk of malignancy (although this is not clear).  Further, while most experts believe that there is no effect on the chance of future fertility, being a successful egg donor does not guarantee that a person will be able to become pregnant in the future.

Egg donation represents a truly modern approach to family building.  It is safe, effective and has helped thousands of patients to become parents.  If you have questions about finding an egg donor, or becoming an egg donor, feel free to contact us, we will be happy to speak with you.