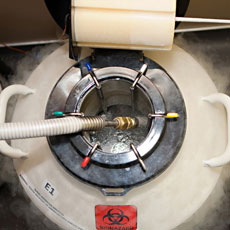 According to fertility specialists at the Center for Fertility and Gynecology (CFG) in Los Angeles, egg freezing is no longer considered “experimental” at their practice. The news comes after the American Society of Reproduction Medicine (ASRM) lifted the label from the infertility treatment after nearly a decade of clinical trials, data collection, and refinement of the procedure.

Egg freezing (oocyte cryopreservation) is a process in which a woman’s eggs are extracted, frozen, and stored for future use. When a woman is ready to become pregnant, the stored eggs are thawed, fertilized using the sperm of either her partner or a donor, and then transferred to the uterus.

Dr. Nurit Winkler, a board-certified obstetrician, gynecologist, and reproductive endocrinologist at CFG in Los Angeles says, “Improvements in egg freezing techniques, namely vitrification, will allow a whole new generation of women to preserve their fertility.”  Such new techniques use flash freezing to prevent ice crystals from forming within the egg. “As we gain experience with these techniques, it is becoming clear that the success of egg freezing is similar to that of fresh IVF,” says Winkler.

According to the ASRM, eggs that were frozen through vitrification have fertilization rates between 71 and 79 percent, implantation rates between 17 and 41 percent, and positive pregnancy rates between 36 and 61 percent. Data gathered by the ASRM shows no increase in birth defects and chromosomal or developmental abnormalities when IVF cycles were conducted using frozen eggs as opposed to fresh eggs. The effectiveness and safety record of the infertility treatment have led to optimism and even excitement among the physicians at CFG.  “Egg freezing represents the greatest step in reproductive equality since the advent of the birth control pill,” says board-certified obstetrician, gynecologist, and reproductive endocrinologist Marc Kalan. “Like birth control, egg freezing gives women more control of when they want to have children.”

The Los Angeles fertility center has been offering egg freezing for over three years; however, with the removal of the “experimental” label, hopes are that more women who need to freeze their eggs due to age or cancer treatment will do so. “Throughout the history of infertility treatment, we have always been on the defensive, trying to ‘fix’ problems after they occur,” says Dr. Michael Vermesh, a board-certified obstetrician, gynecologist, and reproductive endocrinologist at CFG in Los Angeles. “With egg freezing, we are finally getting ahead of the curve, proactively taking steps to maintain a woman’s fertility into the future.”

The Center for Fertility and Gynecology, with an office in Tarzana and a lab in Encino, both in the greater Los Angeles area, has a reputation for being one of the premier fertility centers on the West Coast since opening its doors two-and-a-half decades ago. The specialists at the fertility center are committed to providing advanced medical care, using cutting-edge resources in an environment that supports each couple’s unique needs. To learn more about CFG, email the physicians directly or call (818) 881-9800.