Intracytoplasmic Sperm Injection in the Los Angeles area, the Center for Fertility and Gynecology By on March 29, 2013

Until 1992 and the introduction of the Intracytoplasmic Sperm Injection (ICSI) procedure, couples that had infertility due to severe abnormalities within the sperm could not conceive easily even with the use of In Vitro Fertilization (IVF).  In 1992, Professor Van Steirteghem from Brussels, Belgium was the first to introduce the ICSI procedure, a procedure that changed significantly the field of fertility treatments. During the ICSI procedure, a single sperm is injected directly into the egg allowing fertilization and conception even for the most severe cases of male infertility.   The ICSI procedure can only be done in conjunction with an In Vitro Fertilization cycle.

Indications for the ICSI procedure.

The main indication for the ICSI procedure is in patients who have significant abnormalities within the sperm that can potentially preclude normal fertilization (“severe male factor”).

The use of ICSI nowadays has expanded to other conditions such as the use of ICSI during IVF treatments that require the use of preimplantation genetic diagnosis (PGD), the use of ICSI in couples with a prior fertilization failure during IVF, in women with advanced maternal age and/or women who produce a small number of eggs.

Fertility centers around the country use the ICSI procedure in  50%-100% of their IVF cycles. 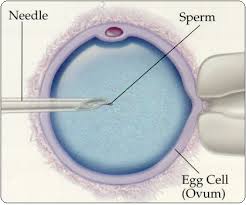 How is the ICSI procedure performed?

During an In Vitro fertilization cycle the hormonal treatment  stimulate  the growth of a large number of eggs (visualized on sonogram as “follicles”). Once the follicles reach a specific size which indicates their level of maturation, the women is given an injection to induce the ovulation process.  Following the induction of ovulation the women undergoes a transvaginal egg retrieval and the eggs that are retrieved are then processed in the laboratory  in preparation for the ICSI procedure.

Although ICSI does not require any specific pretreatment of the sperm, a single sperm is selected and immobilized through gentle pressure. After immobilization of the sperm, the sperm is gently injected inside the human egg (“oocyte”) and 12-17 hours later, fertilization is checked.

While multiple studies showed that the ICSI procedure  can improve significantly the rate of fertilization as well as pregnancy rates in couples with severe male factor, the benefit of ICSI for a  “non male factor” is still very controversial.

There is a possible increased risk of birth defect with the use of IVF/ICSI. The Practice Committee of the American Society of Reproductive Medicine has said it considers ICSI safe and an effective therapy for male factor infertility, but may carry an increased risk for the transmission of selected genetic abnormalities to offspring, either through the procedure itself or through the increased inherent risk of such abnormalities in parents undergoing the procedure.

Here at the Center for Fertility and Gynecology, we perform the ICSI procedure as well as other advanced procedures that can treat and overcome even the most severe forms of male infertility.

If you would like any additional information regarding the ICSI procedure or diagnosis and treatment of male infertility please contact Paula at paula@center4fertility.com